We sell two main inverters: Enphase and SolarEdge. Below is some information about each of them – feel free to contact us with any questions!

Before we dive into all the inverter details, here is a little refresher on how solar panels work. To generate electricity, sunlight shines on a panel and this panel converts the solar energy into DC current. This current flows to the inverter where the it converts DC current to AC current. Your home uses this AC current to power things like air conditioning, heat, etc. For a more detailed explanation on how solar works, click here. 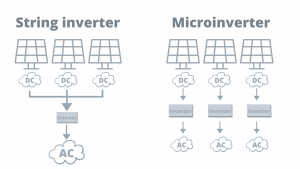 Below are a few useful definitions. For more information, click here.

Power Optimizers: Power optimizers are a middle ground between string and microinverters. They are similar to microinverters because they are placed behind each individual solar panel and allow monitoring of individual panels. They are also a good option for roofs that experience shading. However, they are DC to DC converters, meaning they condition DC current then send it to a centralized inverter which converts DC to AC current. By conditioning the DC current, they allow the current to be more efficiently converted to AC at the central inverter and increases overall inverter efficiency.

Enphase Energy manufacturers microinverters. The company has been a key part of the solar industry throughout the last decade. They released the first microinverter in 2008 and have since seen a lot of success in North America. They also offer a 25-year warranty on their product.

Enphase inverters are NEMA 6 certified, meaning that they are certified to be able to handle harsh and inclement weather. They are tested in high temperatures in Australia, so they will certainly be able to handle any heat New England throws at us! Enphase inverters are also equipped to handle situations that might caused reduced output such as shading, soiling, individual panel damage or degradation, and unideal roof layout.

SolarEdge offers a string inverter + power optimizer system. This system gives some of benefits of microinverters to string inverters. For example, SolarEdge inverters are capable of system monitoring at each panel. Additionally, shade on one or two panels does not affect the output of the whole system. SolarEdge inverters also include a safety feature that allows them to be shutdown down quickly in an emergency situation.

SolarEdge inverters are small and lightweight. Since string inverters tend to be cheaper and simpler than microinverters, with SolarEdge you can get lower costs than you would buying an microinverter. The power optimizers on a SolarEdge system allow you to easily expand a solar panel system and add more panels if necessary. SolarEdge also offers a 12 year warranty on their product.

There is a lot to think about when considering which inverter is best for you. Feel free to reach out and contact us with any questions, and to get a free solar quote so we can tell you what we think will suite your solar needs.

The following datasheets give more detailed information from each company about their inverters.

Interested in solar but not sure if it's right for you? Contact SGE Solar for a free no-obligation solar consultation.