But the unemployed residents weren’t out of work for long. Most of the 300 to 400 oil field workers found jobs installing solar panels beneath the hot and abundant West Texas sun.

Pecos now has five operational solar farms, large projects that meet the definition of utility-scale – having the capacity to generate at lease 1 megawatt, enough to power about 200 houses on a hot Texas day.

All told, the projects, including two likely to get underway within the next few years, are expected to add hundreds of millions of dollars to the tax base of the county, where solar panels stand on the same property as gas flares and drilling rigs.

“It’s a great marriage,” said Doug May, the executive director of the Fort Stockton Economic Development Council in the county.

Pecos County, which has only three people in each of its 5,000 square miles, has become a hub for utility-scale solar power. Across the nation, solar farms are poised to become a boon for rural economies that have been hard hit by the decline of industries such as agriculture, manufacturing and coal, as well as the boom-and-bust cycles of oil and gas.

In North Carolina, for instance, farmers lease fallow land to solar panel companies; in West Texas, counties like Pecos, once reliant on oil and gas extraction, are diversifying through solar and wind power.

Utility-scale projects are eligible for a state tax abatement – up to 80 percent for 10 years – an incentive that has drawn projects to places like Pecos County. Texas’ utility-scale installations, at around 783 megawatts, are expected to double in Texas this year, according to the Solar Energy Industries Association, a national trade group.

Beyond abundant sunshine, the county’s other draws are its many transmission lines that feed into the electric grid that serves the state’s population centers. More transmission lines are expected to be added in 2019 and 2020, likely driving another burst of solar installations, May said.

If that happens, solar power will exceed the county’s 700 megawatts of wind energy. In addition, solar companies will employ locals even as the price of oil remains stubbornly below $50 a barrel.

“It has basically helped to compensate for the boom and bust cycle,” said Colin Meehan, the director of regulatory and public affairs for Houston-based First Solar, which has two solar farms in Pecos. “They see it as just another source of revenue.”

Pecos is a model of how rural counties can benefit from renewable energy, said Helen Brauner, the director of origination strategy for 7x Energy, an Austin-based utility-scale solar company. In Austin on Tuesday, Brauner and other solar executives gathered at a conference hosted by the Solar Energy Industries Association.

“The typical 100-megawatt solar project should give the county about $30 million in property tax revenue” over the duration of the project, Brauner said.

The conference attendance nearly doubled this year to more than 400, a sign that Texas is primed for more investment in solar, conference organizers said.

In September, Houston-based NRG Energy bought one the projects, the 154-megawatt Buckthorn solar farm in Pecos County. When the project is done next year, its sole customer will be Georgetown, a city of about 60,000 north of Austin. 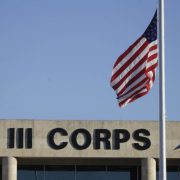 The U.S. military’s biggest base on American soil has begun drawing nearly half of its power from renewable energy, days after President Donald Trump’s decision to pull out of a global agreement to fight climate change.

Fort Hood, in Texas, has shifted away from fossil fuels to wind- and solar-generated energy in order to shield the base from its dependence on outside sources, a spokesman said.

“We need to be autonomous. If the unfortunate thing happened and we were under attack or someone attacked our power grid, you’d certainly want Fort Hood to be able to respond,” Chris Haug, a spokesman for Fort Hood, said in a phone interview.

The project brings the Army base, home to 36,500 active-duty personnel and some 6,000 buildings, in line with the Department of Defense’s decade-long effort to convert its fossil fuel-hungry operations to renewable power.

It comes in the wake of Trump’s decision last week to withdraw the United States from a landmark global agreement to fight climate change, the Paris accord, a move that drew condemnation from world leaders and heads of industry.

The project is already fully operational. Its 63,000 solar panels, located on the base’s grounds, and 21 off-base wind turbines provide a total of some 65 megawatts of power, according to an Army statement.

Previously, some 77 percent of base’s energy was generated by fossil fuels, a 2015 draft report assessing the renewable energy plan shows.

Burning fossil fuel generates greenhouse gases that are blamed by scientists for warming the planet.

The Paris accord aims to reduce such emissions, including by encouraging a shift to clean energy.

Fort Hood’s new solar field and wind farm will result in savings of more than $100 million over some 30 years, the Army said.

Over the last decade, the U.S. military and intelligence officials have developed a broad agreement about the security threats that climate change presents, in part by threatening to cause natural disasters in densely populated coastal areas, damage American military bases worldwide and open up new natural resources to global competition.

The number of military renewable energy projects nearly tripled to 1,390 between 2011 and 2015, a Reuters analysis of Department of Defense data previously showed.

The Defense Logistics Agency (DLA), a Department of Defense agency assisting the Army in its renewable-energy shift, is also working with the U.S. Air Force on long-term renewable energy projects, a DLA spokeswoman told the Thomson Reuters Foundation.