What Fuels your Electricity in Massachusetts?

What Fuels your Electricity in Massachusetts?

Electricity in Massachusetts comes from a few main sources: Solar, Wind, Hydroelectric power, Biomass, Petroleum, and Natural gas. Currently, natural gas is the largest source of electricity, coming in at 67% of electricity fuel. Next is renewables at 30%, then hydroelectric and lastly petroleum at 0.5%. The graph below from the EIA shows this breakdown. 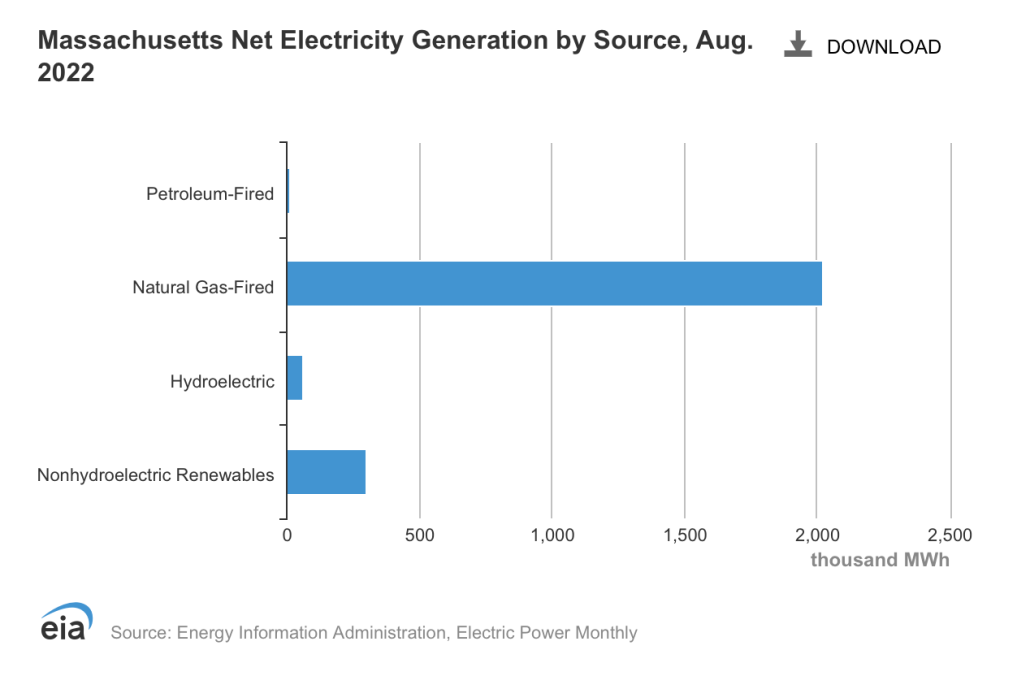 Wind power is another important aspect of the renewable energy makeup in the state. It currently accounts for 1% of energy generation, but proposed wind projects for the coming years will increase this percentage quickly. The Vineyard Wind Project is an example; which will provide an anticipated 62 wind turbines by 2023 off the coast of Martha’s Vineyard Wind comes primarily from offshore wind projects along the coast, but also from mountain wind projects. For example, the wind turbine at the Jiminy Peak ski resort takes advantage of the mountainside geography and climate to harness this energy to power the resort.

Massachusetts does not have reserves or produce either petroleum or natural gas, so they are both imported. Natural gas comes from surrounding states through pipelines. The main source of petroleum comes down from the Appalachians (specifically the Marcellus and Utica shales) in the Appalachian basin, and also from Nova Scotia. Almost ⅓ of natural gas is used in the residential sector for heating, and petroleum is mostly used for transportation.

The state also does not produce or import any coal to support its energy use. The last coal fired power plant was shut down in 2017. So, coal is not used for utility scale electricity generation anymore!

What about Nuclear Energy?

Massachusetts had a nuclear power plant located in Plymouth, called the Pilgrim Nuclear Power station. This plant was open from 1972 – 2019. However, due to controversial public opinion as well as mechanical problems, the plant was shut down in the 1980s, then again finally in 2019.

How does MA compare to other states?

Here are a few fun facts!