It is one of the newest innovations in solar technology! Floating solar is essentially putting solar panels on any man-made body of water. These bodies of water could include reservoirs, quarries, storage ponds, or water treatment plants (Solar Builder.) Since Massachusetts and Rhode Island are relatively small states, they don’t have a lot of unused land. So, this innovation is a great way to install a lot of solar power without taking up too much space. Floating solar is second only to rooftop solar, of course, in terms of potential to power our world with clean energy! 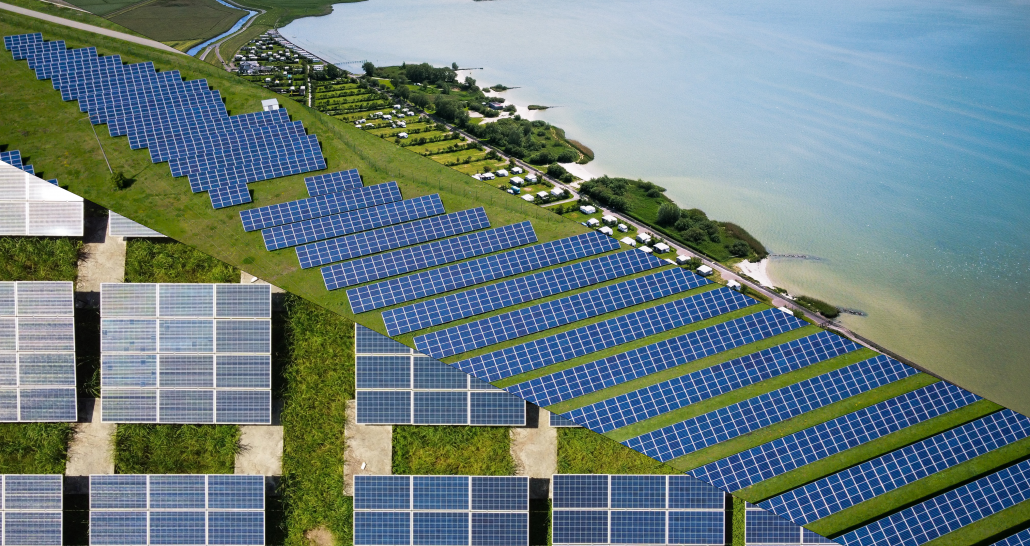 As mentioned above, one of the main advantages of floating solar is that it does not take up any space on land. Similarly, it solves the tree debate issue. There is often controversy over whether or not to cut down trees on a plot of land to put in a solar array. But, there is no need to worry about this in the middle of a lake!

Additionally, studies have found that solar panels mounted on bodies of water are actually up to 15% more efficient. This is because the water helps keep them cool.

One caveat to floating solar is the higher initial costs in comparison to land-mounted arrays. However, this cost likely cancels out when you take into consideration the higher efficiency and lower maintenance cost of floating solar. Maintenance cost is lower simply because there is no cost associated with upkeep of the land. There is no need for lawn mowing, weed whacking, tree trimming, etc. on a lake. All of this tends to be necessary to keep up a ground mounted array. So, while the initial cost is higher, in the end the overall price is comparable to other solar technology.

While putting solar panels in water is gaining popularity, it still causes people still have doubts about its efficiency and possible repercussions. For example: changes in water ecosystems, water contamination, and turning a spot into an eyesore are all factors to consider.

However, in terms of water ecosystems, some scientists have actually found that the cooling effect of panels on a lake may be beneficial. This cooling could decrease stratification (the process by which the sun heats different layers of a body of water). In turn, this could actually increase water quality. Read more about this effect in this article from Science Daily.

Many places where floating solar has already been implemented have taken into consideration concerns about contaminating water. Local rules often enforce that the plastic used to mount the solar panels is drinking water safe.

Lastly, although many are worried about the potential for these solar arrays to become an eyesore, in Massachusetts the target locations for these projects are privately or commercially owned waters. Floating solar generally won’t be put on publicly used ponds or lakes, so it is likely that the public may not even notice new solar arrays.

Floating solar has seen a large increase in popularity over the past 5-6 years. Currently, China and Japan are paving the way with the most floating solar installations. Floating solar is a great way to get more solar power into the world, but if you don’t have solar panels on your roof, that is a great place to start too! Contact us if you are interested in going solar.

All About Ground Mounts

Solar in the Fall
Scroll to top